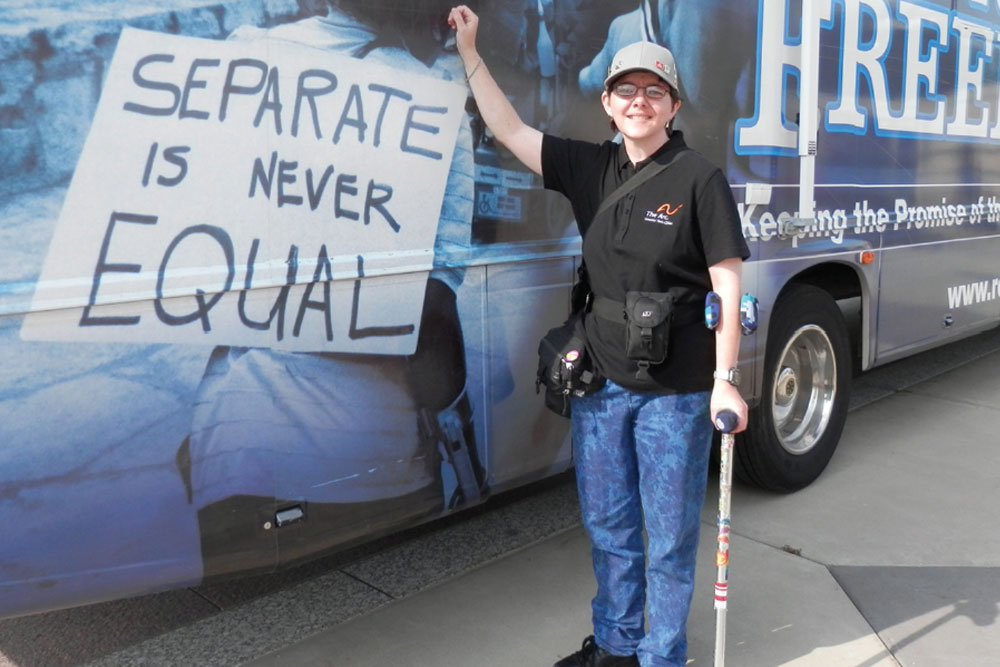 It began as a way to help shape a new, federally-funded website dedicated to self-advocacy, but the Institute’s Self-Advocate Advisory Committee (SAAC) didn’t stop there.

Since 2019, the committee has reviewed research study questions to test whether people with intellectual disabilities may have difficulty understanding them, for example. Members have flagged photos in draft brochures that send the wrong message, or lack diversity. They have warned investigators when surveys asked too many questions, when print materials used a too-small typeface, or when a brochure headline used language that struck them as inappropriate. They helped recruit a person with disabilities to join the Minnesota Leadership Education in Neurodevelopmental and Related Disabilities (MNLEND) fellowship program.

“The committee has given high-quality, critical feedback on the pieces they have reviewed for ICI,” said Katrina Simons, a community program specialist who organizes SAAC meetings and serves as a liaison between the committee and ICI. “Some self-advocacy groups focus on teaching the skills involved in speaking out, which is an extremely important mission. Our goal is to use the committee’s talents to directly inform policy and training as it is being written.”

Heidi Myhre (pictured), a committee member who has been active in both the Self-Advocacy Movement and in policy work with the Institute and other organizations, emphasized the importance of having people with different types of abilities and disabilities review research and training projects.

“We have to make sure we explain things in different ways and to give people the opportunity and time to process,” she said. “This work helps us tell our story in a way that everyone can understand.”

website under a grant from federal agencies, including the National Institute on Disability, Independent Living, and Rehabilitation Research. It was that project that sparked the idea for the committee, said John Smith, a coordinator at ICI.

“The SAO website is intended to share interesting and useful information with people who have a range of intellectual ability, so the need for input from self-advocates became evident as we began thinking about the best ways to share our research,” Smith said. “Rather than making assumptions about making data understandable for people with intellectual and developmental disabilities, we formed a group that would review content developed by ICI’s staff and suggest ways to make the language more plain and more relevant to people’s lives.” The content developed for Self-Advocacy Online goes beyond plain language and often incorporate graphics, video, and animation to illustrate key ideas.

The committee, supported in part by a federal grant to Self Advocates Becoming Empowered, currently has 10 members, including three from outside Minnesota who also serve in national self-advocacy organizations.

"It’s not a common thing that a university would ask our opinion on their work,” Teresa Moore, a committee member and director of the Self Advocacy Resource & Technical Assistance Center,

said after the recent meeting. “It’s a matter of respect."

Moore routinely shares traditional advocacy news with SAAC members, and takes their concerns back to national groups. Not surprisingly, much of the conversation today centers on the pandemic.

"In a lot of places, even though states are opening up, people with disabilities are having difficulty getting their rights acknowledged,” she said. “We hear stories about family members controlling activities to only doctor’s appointments, with no participation in the community. We need to keep talking about this."