Now I’ve Got Your Heart: Celebrating the Education of Direct Support Professionals 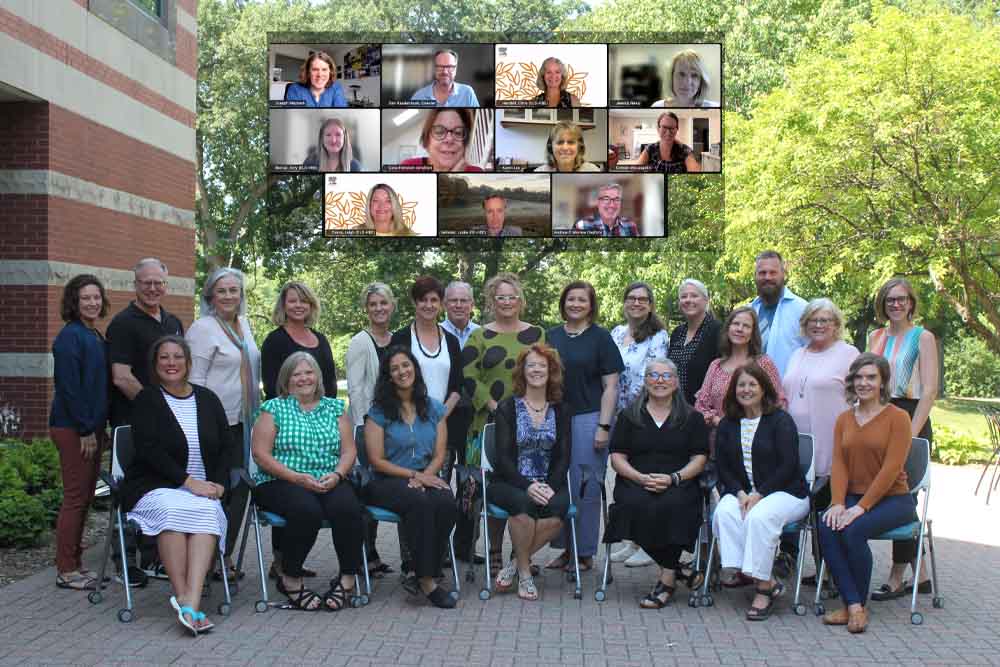 The College of Direct Support National Advisory Board, with ICI staff, in Minneapolis in June 2022.

The Institute’s Research and Training Center on Community Living is celebrating the 20th anniversary of its College of Direct Support, a critical partner for service providers as they navigate high staff turnover rates that have worsened in the global pandemic.

In June, ICI welcomed the College of Direct Support National Advisory Board to Minneapolis for its annual meeting. Board members are national leaders in the direct support workforce who come together annually to explore topics important to the growth and vitality of CDS and DirectCourse

ICI Director Amy Hewitt, along with Elsevier’s Therese Mugge and others, shared their reflections on emerging issues, national trends, and policy in the direct support workforce. ICI’s Jerry Smith shared a film highlighting the origins and achievements of the College of Direct Support.

Launched in 2002 when on-demand learning was in its infancy, the College of Direct Support has produced critical tools for recruitment, training, and retention of direct support professionals (DSPs), several disability advocates within and outside of ICI said in the video.

“We didn’t develop a course and then match it to a skill standard,” said Hewitt, who, along with several current and former ICI staff members, helped create CDS. Hewitt and O’Nell, director of content for CDS, reminisced about the early work of developing training for DSPs. “We started with the skill standards and built the curriculum around the core competencies of workforce development and practice improvement,” Hewitt said.

In the last fiscal year alone, learners completed more than 650,000 DirectCourse lessons. DirectCourse is a learning management platform of Elsevier, which began collaborating with CDS in 2011.

Nancy Thaler, former deputy secretary of developmental programs for the Commonwealth of Pennsylvania, talked about being initially skeptical that an online course could deliver the dynamic experience needed to train support workers. Then Charlie Lakin, the former director of the Research and Training Center on Community Living, presented the vision for CDS, and Thaler became an early champion of the curriculum.

“I very much value high-touch, interactive training and think trainers have a role in motivating people and inspiring them,” Thaler said. “Charlie has tremendous credibility in the field, and as he talked, lightbulbs started going off and I concluded we need this in Pennsylvania. Having been a direct care worker myself, I experienced the effects of staff turnover. Every time a new staff person came in you were starting from scratch because you could presume nothing. With the College of Direct Support, because it had a learning management system and people would own their file and it would move with them, you could presume they were at a higher level and could build from there. It would save time and money.”

Others reflecting on the success of CDS included co-founder Bill Tapp of Tennessee, who talked about recruiting Lakin and Hewitt to develop the curriculum for CDS’ original technology platform.

That led to an effort to get federal funding to launch the initiative, which Sue Swenson, then the commissioner for the Administration on Developmental Disabilities, fully supported.

“If you tell me the regulations, then you’ve got my hands and I’ll do what you tell me to do. If you tell me what the purpose is, then you’ve got my head, and I can think of ways to tweak it so now I’m getting something better out of it. And then, if you really understand the why, now I’ve got your heart, and that’s where the real action is,” said Swenson, a former ICI volunteer and longtime collaborator, who has held several leadership positions across the disability field. “Then you’ve got people going way beyond what compliance requires. And that only comes from education and experience.”

Others paying tribute to the College included John Tschida, director of the Association of University Centers on Disabilities; Joe Macbeth, president and chief executive officer of the National Alliance for Direct Support Professionals; and Donna Meltzer, chief executive officer of the National Association of Councils on Developmental Disabilities.

“The work we do is completely dependent on the strength and the capabilities of the direct support professionals,” said Mary Lou Bourne of Management Support Solutions, Inc.

Marie Bonnet, named the 2020 Direct Support Professional of the Year by ANCOR for her work with SEEC (Seeking Employment, Equality, and Community for People with Developmental Disabilities), said the curriculum delivers the heart Swenson was talking about, putting people with disabilities at the center of everything the support workforce does.

“One thing I have learned through CDS is that it’s not about me. It’s not about you. It’s about the person we support—their needs, what they want,” Bonnet said.

“The world has changed a lot since we started, and we’ve kept the curriculum updated, but in the next few years we’ll be re-engaging to do that next stage of co-creation, and that’s exciting,” O’Nell said. 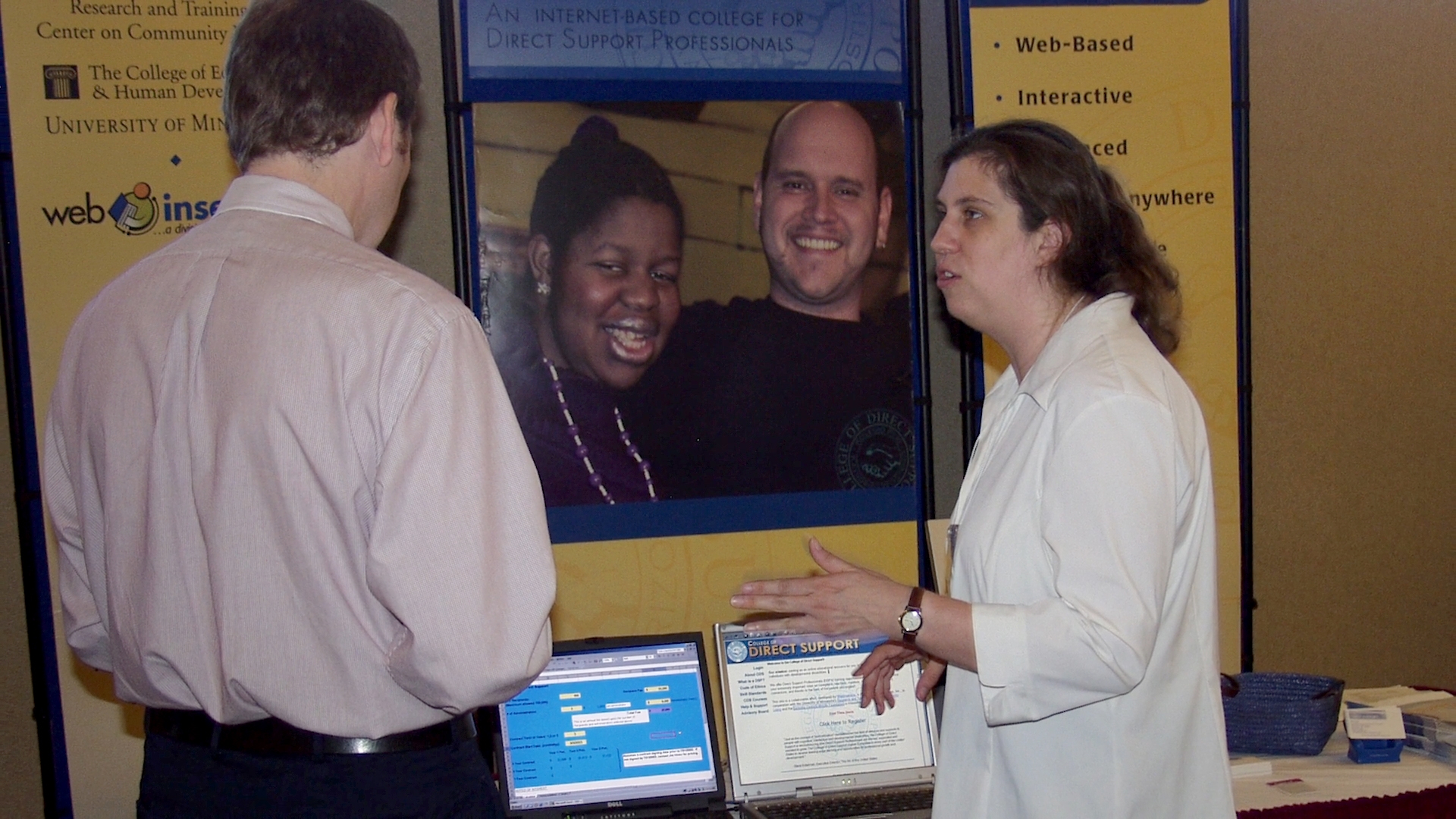 Susan O'Nell of the College of Direct Support speaking to a prospect at a conference in the early years of CDS.