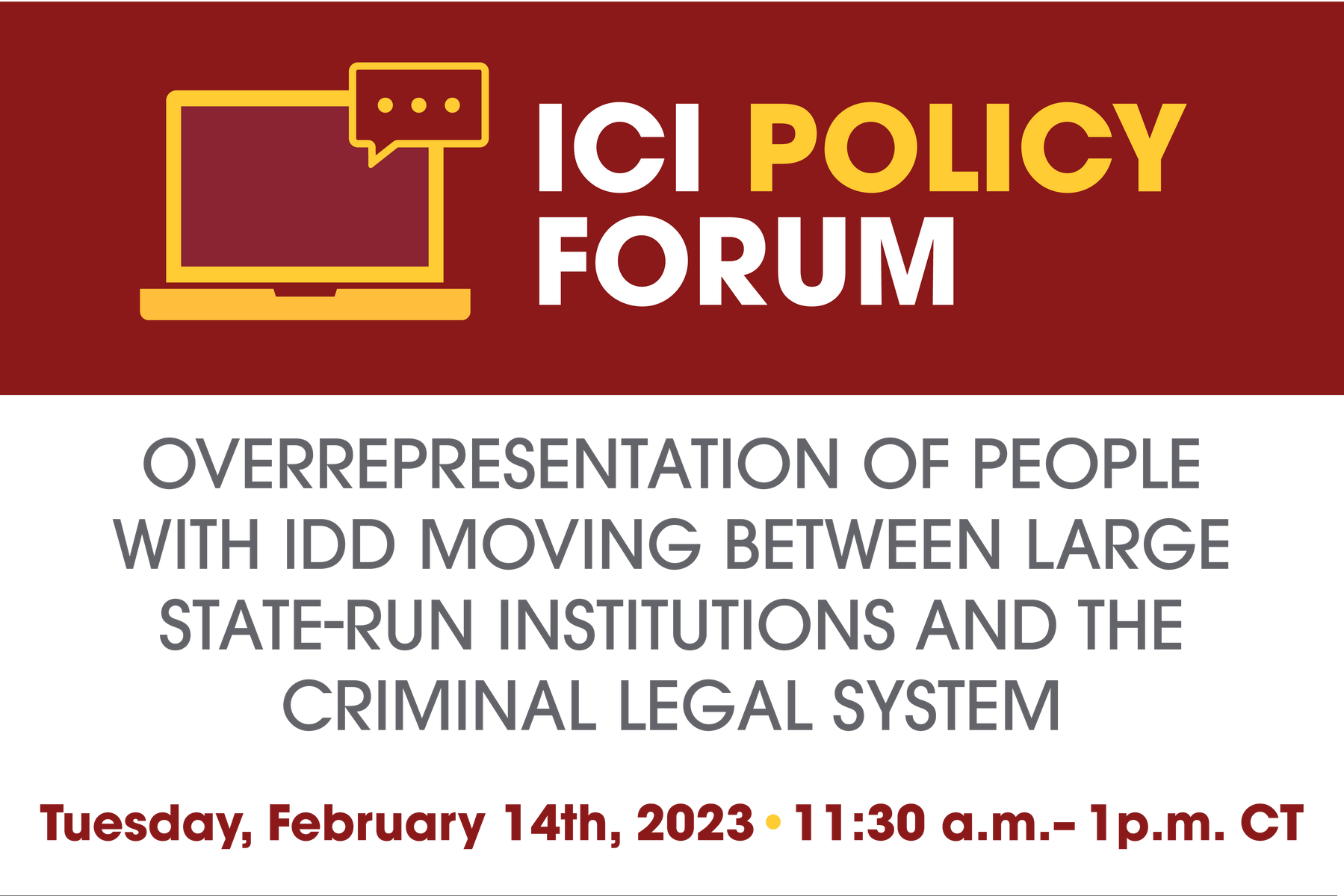 Jails and prisons are now the biggest source of incoming residents to large state-run institutions for people with intellectual and developmental disabilities (IDD). So, what does that mean for people with IDD?

Overall, it’s important to understand that in 2019, just 7 percent of people in large state-run IDD institutions had prior involvement with the criminal justice system. Acknowledging these findings and creating more opportunities for people with IDD to thrive outside of large facilities is the focus of a Feb. 14 Policy Forum

“We wanted to see how deep this problem runs and explore policies to improve lives for the not insignificant number of people this affects,” said Jon Neidorf, a researcher at the Institute who led the creation of the Policy Research Brief: Overrepresentation of People with IDD Moving Between Large State-Run Institutions and the Criminal Legal System. “In essence, we want to use the data to help make the case for strengthening home and community-based services to better serve people who are often written off as being too difficult or unsafe to live in the community.”

Policy recommendations to be discussed include stabilizing the direct support workforce as a way to better support people with significant needs living in community settings, and studying how historically marginalized racial and ethnic populations with IDD fare in the criminal justice system.

“People with IDD experience tremendous harm at multiple points in the legal process, from wrongful arrests and convictions based on coerced confessions, to periods of legal limbo when they are found incompetent to stand trial due to their disability,” said Pamila Lew, senior counsel at Disability Rights California, one of the invited forum speakers. “Once incarcerated, people with IDD can be targets of violence, and they frequently experience isolation due to being placed in solitary confinement, supposedly for their own protection or as punishment for perceived non-compliance. I’m looking forward to the forum to discuss how we can work toward creating better options.”

The policy research brief draws on decades of research conducted at the Institute’s Research and Training Center on Community Living that tracks the living arrangements of people with IDD who receive long-term Medicaid or state-funded support services. The Residential Information Systems Project (RISP) annually surveys state IDD agencies and the remaining large state-run IDD institutions about the types and sizes of the places people with IDD receiving services live. The RISP has, over the last several decades, charted the dramatic decline in institutionalization of people with IDD as more people get the support they need while living with family members or in other community homes.

As the number of people living in state-run IDD institutions declined from 194,600 in 1967 to 16,200 in 2019, the proportion of people entering those facilities from jails and prisons increased to 29 percent, now the largest source of incoming residents. While 61 percent of people leaving state-run IDD institutions move to group homes, their own home, the home of a family member or a host or foster family home, the rest moved to another institution, most commonly a correctional facility.

“This movement to and from the corrections system deserves attention,” said Sheryl Larson, RISP director and an ICI principal investigator who has charted the deinstitutionalization movement since the late 1980s. “It would be even more helpful to have a clearer picture of the number and characteristics of all people with IDD in the criminal justice system.”

The percentage increase in people moving between institutions and the correctional system doesn’t reveal how prevalent IDD is in the overall corrections population, for example, Larson said. Except for some data tracking of juveniles in the corrections system, surveys also don’t capture comprehensive data on race, ethnicity, and other characteristics, she said.

“Movement of people with IDD between state-run IDD institutions and the correctional system is only a small part of the picture,” Larson said. “We know almost nothing about people with IDD in jails and prisons.”

Beyond the numbers, the policy brief lays out for discussion critical community needs for addressing the implications of the trends in institutional living.

“It comes down to what we can do in the policy world to advance community living for everyone,” Neidorf said. “If we firmly believe that community integration is of value to everyone with IDD, what are the key system changes that need to happen? These are a few things that need to be a lot stronger to support people who do have high levels of need but still deserve to be living in the community.”