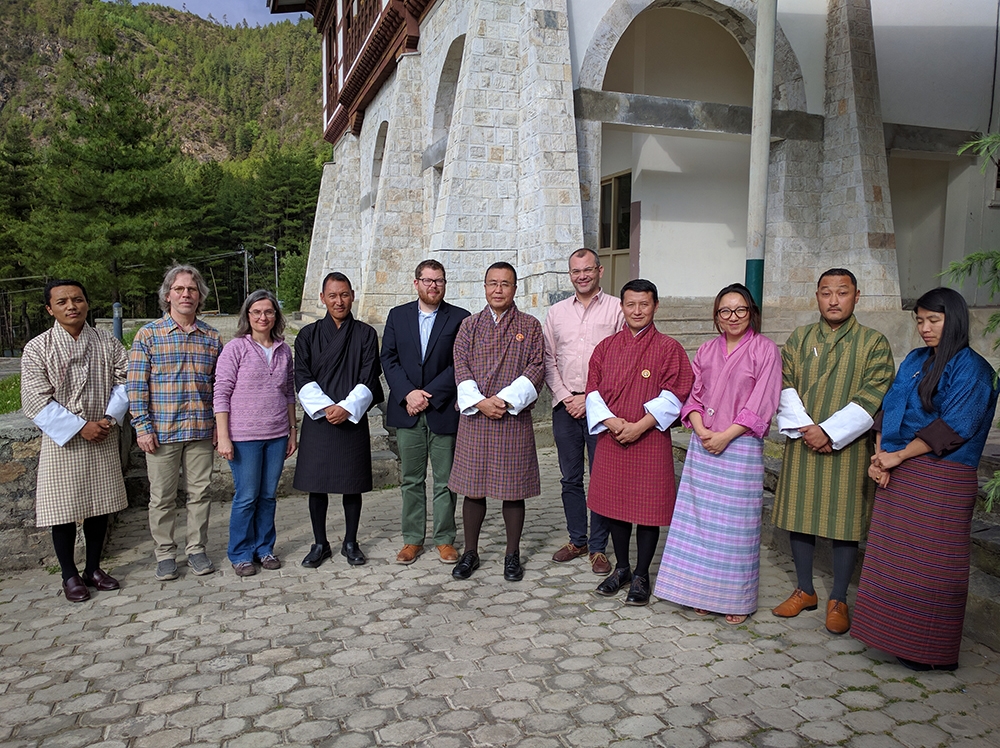 ICI’s Renáta Tichá, principal investigator, and Brian Abery, co-principal investigator (pictured second and third from left), with local and international colleagues in Bhutan in 2019. The Bhutan project, which continues into 2022, promotes meaningful work and social inclusion for Bhutanese youth and young adults with disabilities. The Japan project has a similar mission, serving transition-age youth, young adults, and adults with disabilities.

Japanese companies are required to staff about two percent of their workforces with people with disabilities, but many individuals remain unemployed, underemployed, or stuck in jobs for which they are ill-suited.

In a new collaboration with U.S. and Japanese universities and Sega Sammy Holdings Inc., ICI’s Global Disability Rights and Inclusion group will study these gaps and create customized tools that promote meaningful employment and the social inclusion of people with disabilities in Japan.

The project, funded by the U.S. Embassy, Tokyo, is called Making Employment Meaningful for People with Disabilities: A US-Japan Partnership.

“We’re trying to build inclusive education throughout the world, but what happens to students with disabilities after they leave school is also of critical importance,” Tichá said. “By partnering with employers and schools, we are building expertise and materials that will help people with disabilities and their families access better opportunities.”

A key component of the work will be to more fully develop the concept of self-determination, or the ability of people with disabilities to control aspects of their lives that are important to them, in Japan.

“Self-determination has been introduced in Japan, but the concept is a little different there,” said Satomi Shinde, a professor at University of Wisconsin-River Falls. “We’re excited to see a company like Sega Sammy being interested in true inclusion and in making employment more meaningful to people.”

In addition to making workplaces more inclusive, the efforts also have a business case. Finding ways to unlock unique skills, rather than simply training all workers with disabilities to do repetitive tasks, has broad implications for companies as they seek greater efficiencies through advancing technologies.

“In our previous work in eastern Europe we met a mother of someone with an intellectual disability who approached every company in her city until she found an employer willing to hire her daughter for a skilled position. Six months later the company came back to the mother asking her to introduce them to more workers like her daughter,” said Abery. “Customized employment is about getting people to the point where employers can see through the disability to the person and their gifts and capacities.”

That recognition becomes even more important as Sega Sammy and other large employers weather the economic storm created by the pandemic, Abery said. As more companies grapple with job cuts this year, he said, the ones that have focused on developing a broad spectrum of talent will be the ones with the most productive workforces.

The project officially begins Feb. 1, and will include interviews and focus groups in Japan to determine the areas of greatest need. Two fact-finding visits, one in Japan and one in Minnesota, are also planned as a way to expose Japanese educators and others to customized employment programs in the United States. Eventually, the group expects to publish Japanese-language materials for educators and employers.

“Building this area of expertise and sharing these materials is important for ICI’s Global Disability Rights and Inclusion area, and will lay the groundwork for future partnerships and projects,” Tichá said.