Exploring Retirement for Individuals With Intellectual and Developmental Disabilities: An Analysis of National Core Indicators Data 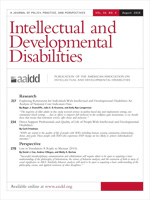 To begin to understand retirement, we examined age-related differences in (a) employment rates, employment hours, and rates of individual-plan employment goals; and (b) participation rates in unpaid formal day programs. We report weighted analyses of 2014-15 National Core Indicators data from 32 states. Unlike younger age groups, a similar proportion of workers with intellectual and developmental disabilities continued working beyond age 65 as for the general community. We found that most workers with intellectual and developmental disabilities retire in older age and that their retirement appears to be sudden, rather than a gradual reduction in work hours. Facility-based day programs were the only program with an increased participation rate in older age groups, revealing an even greater reliance on facility-based services for older participants.