Even in Death, Disparities 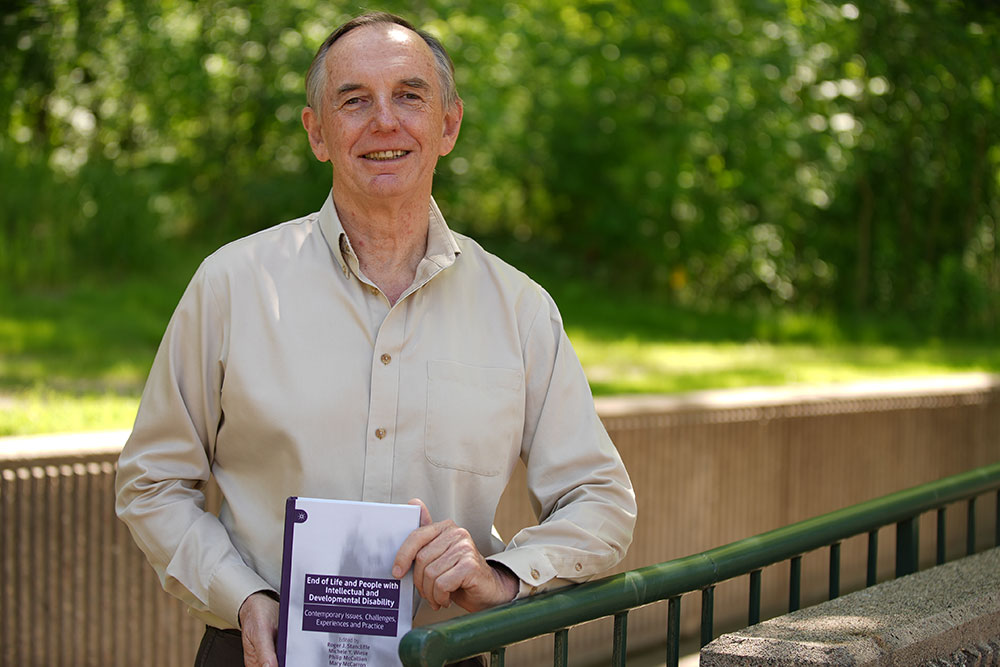 A daughter is kept from attending her mother’s funeral. A patient who feels sick is never told he is dying.

edited by a team that includes the Institute’s Roger J. Stancliffe explores the persistent inequities that people with intellectual and developmental disabilities (IDD) experience at the end of their own or their loved ones’ lives.

End of Life and People with Intellectual and Developmental Disability: Contemporary Issues, Challenges, Experiences and Practice (Palgrave Macmillan) presents scholarly research and its translation into practice, with real-world personal stories, resources, and practical discussions of do-not-resuscitate orders, suicide, accessible funerals, death doulas and other topics. More than three dozen authors from 10 countries in Europe, Australia, and North America contributed to the work.

Stancliffe, now an ICI senior research associate, is professor emeritus at the University of Sydney. He has been studying and writing about end-of-life issues for people with IDD for more than a decade. Michele Wiese, Western Sydney University; Philip McCallion, Temple University; and Mary McCarron, Trinity College Dublin, Ireland, also served as editors.

“The taboo and the sensitivity of the topic has meant that this wasn’t even a research question until about 20 years ago, and those dynamics still play out today in real life,” said Stancliffe, who wrote three chapters in the book. “Families and support staff are fearful of upsetting the person and causing long-term psychological harm, so they do nothing or actively conspire to hide the truth, with the best of intentions. But there’s good reason to believe that path is actually causing harm.”

“Gina,” a 43-year-old woman with disabilities described in one of the book’s chapters, was told by family members that she could not attend her mother’s funeral. Over the course of 5 years, Gina grew increasingly agitated, which led to shouting and crying and she was characterized as having challenging behaviors.

Another chapter in the book includes the story of an Australian indigenous man with intellectual disability who had been separated from his birth family as a child. With the support of an indigenous support staff worker, he learned about end-of-life customs and reconnected with some of his birth family, expressing his wishes about what he wanted for his funeral service. Those wishes were honored, unlike the many times when people with IDD are unable to express their wishes because they are never told they are dying.

Including contributions from a global mix of authors was important because of the significant differences around the world in end-of-life customs, Stancliffe said.

Regardless of culture, however, the need for more and better communication about the end of life is universal, he said.

“It’s been proven that sudden death is more psychologically harmful to survivors, so if we don’t tell people with disabilities that someone close to them is dying, they in effect experience a sudden loss,” he said. “If they aren’t told until after the fact, they often feel guilty or come up with erroneous beliefs about what happened that can stay with them for years.”

Start small.  In one study, Stancliffe and his team enlisted staff members of a group home to casually bring up opportunities to talk about death and dying in non-critical situations, such as when passing by a cemetery during a car ride or seeing a television show about someone dying. They were asked to talk about what happens when someone dies. Compared with a control group, there was no increase in rates of depression or in fear of death among the group that had the conversations, and an overall improvement in anxiety levels. “In other words, there was no measurable psychological harm associated with talking about death,” he said. “We also found that most conversations were actually initiated by the person with disability. They really wanted to know.”

Enlist help. Resources are available that can help start conversations. In addition to the book and its own extensive list of resources, Stancliffe noted Talking End of Life … with People with Intellectual Disability [TEL].

The site offers videos and 12 learning modules designed for support professionals, which are also helpful for families and educators.

“The reality is, we all die, and helping people with disabilities grapple with that is necessary,” he said. “Colleagues in New Zealand did a study in 2017 that was essentially about successful advance care planning, directly involving adults with IDD who knew they were dying. Disturbingly, they wrote a companion article about the challenges in recruiting people for that study. There were plenty of people with IDD who were living with a terminal diagnosis, but very few who had been told they were dying.”