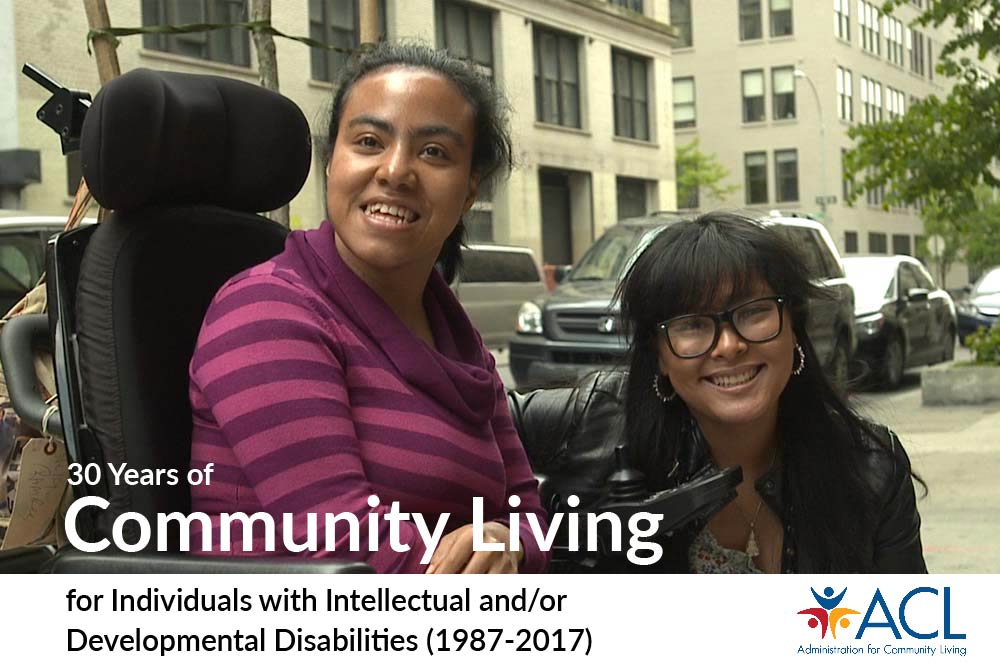 A newly published book tells the 30-year story of how people with intellectual and/or developmental disabilities (ID/DD) have lived, worked, and received support services as the United States transitioned away from institutional care.

The book, 30 Years of Community Living for Individuals with Intellectual and/or Developmental Disabilities (1987-2017)

, was produced by the University of Minnesota’s Institute on Community Integration (ICI) for the Administration for Community Living (ACL). Using accessible language, it weaves the latest reports from three longitudinal data projects of national significance with real-life, personal accounts by people with ID/DD to inform policymakers, legislators, and others. The release coincides this month with the 31st anniversary of the Americans with Disabilities Act.

Critical data points from the 51-page book, available in a digital edition

The three data projects are produced by the Institute’s Residential Information Systems Project (RISP), which studies where people with ID/DD live and how many of them get paid supports;  the Institute for Community Inclusion

, which studies public spending on services and the impact of technology on the lives of people with ID/DD.

“This book is a different way to present research. I hope it will attract a wide audience and become apparent that people with disabilities have the same dreams and desires that the rest of Americans do,” Katherine Cargill-Willis, a program specialist for the ACL, who also is a person with disabilities, shares in a forthcoming video presentation about the project.

“This story is about the then, the now, and the not yet of community living,” Larson said. “It’s the story of a framework for inclusion that supported the movement out of institutions to happen. We want people with disabilities, lawmakers, and others to know this history so we don’t repeat the mistakes.”

Shea Tanis, principal investigator of the State of the States in Intellectual and Developmental Disabilities Longitudinal Data Project of National Significance at the University of Colorado, said the book captures decades of data on trends in spending on supports for people with ID/DD, data that show a wide variety of investment by states.

“We follow the money … giving us insight into programs and services and the impact of policies across states and the nation,” Tanis said.

Having access to paid, competitive employment is another critical point of measurement, notes John Butterworth, principal investigator at the Institute for Community Inclusion at University of Massachusetts Boston.

“The advisers to this project told us they want real jobs and meaningful ways to spend their days,” Butterworth said. “We know how to do this, and there has been steady innovation in our approach to employment support, career planning, and discovery. There’s been a lot of progress, but we continue to struggle with shifting funding and supports to meet this vision.”

One positive – an improvement in the use of virtual training and employment opportunities during the pandemic – holds promise for the future, Butterworth said.

“There are still so many things that people need that they aren’t getting,” Larson said. “There are a good number of people waiting for services, there is a dire shortage of direct support professionals, and the digital divide is significant. People with ID/DD are much more likely to be victims of crime, and technology can be effective in keeping people safe.”

People with disabilities themselves best articulate the “not yet” aspects, Larson said.

Nicole LeBlanc, a veteran self-advocate, is among the people with disabilities who served as national advisors for the project.

“For the next 30 years, we should be focused on developing a robust long-term care system that plans for disability,” LeBlanc shares on the video. “It’s something we’re all going to face sooner or later, as the population ages and the threat of more pandemics appear. But it shouldn’t have to happen to you to matter to you.”