Stepping Out for Art 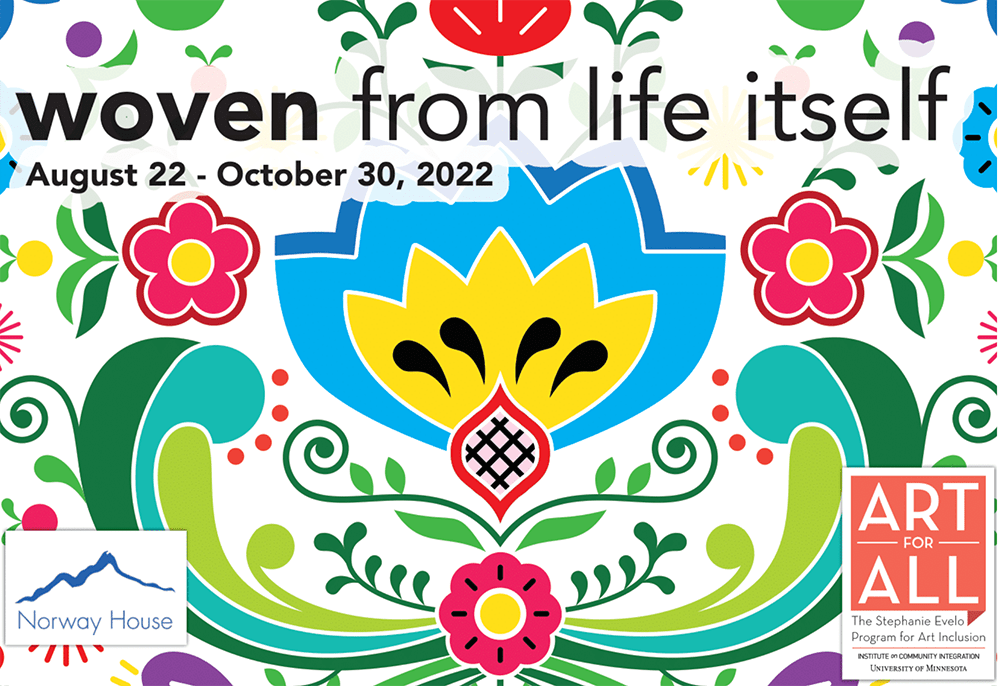 If acceptance is a path to peace, Norway House in Minneapolis moves the community a step closer this month as it hosts woven from life itself, an Art for All exhibit celebrating disability pride and pride in other identities.

The collaboration between ICI’s Art for All: The Stephanie Evelo Program for Art Inclusion, and the Minnesota Peace Initiative at Norway House in the Ventura Village neighborhood of Minneapolis offers a unique voice in depicting peace and coexistence, organizers said.

Challenging artists to contribute works depicting an aspect of peace resulted in a show that celebrates acceptance in the pursuit of disability justice, said Max Stevenson, director of exhibitions at Norway House.

“The artists are reflecting an inner peace,” he said. “It’s as if they are saying, ‘I’ve accepted myself and now the community accepts me as I bring awareness to my story and my art.’”

Nik Fernholz, program manager for Art for All, said the exhibit fulfills the program’s ongoing mission to bring the work of artists with disabilities into new communities.

, but it’s also important to get out into communities to promote disability as a strength to be celebrated in the art world,” said Fernholz. “We connect with one another as we weave these identities. So that is woven from life itself – the unique identities that make up who we are as individuals, and the unique set of artists we’ve been able to curate.”

Featured artists include David “Mack” McDonnell-Forney (landscape photography), Janette Tafoya Giles (watercolor), and Ingrid Hansen (watercolor, others) of Minnesota and Frode Felipe Schjelderup of Stavanger, Norway, who incorporates heavy metal music and other influences into his drawings and paintings. Work by documentarian Heidi Benedict Sundby and musician Bjørn Hatterud, both of Oslo, are also included.

A new acquisition for the Art for All permanent collection, a painting titled “Little Waterfall” by William Britt, is also on display.

“It’s been fun to see people’s reactions to the multimedia aspects of the exhibit,” Stevenson said. “People sit down and get engrossed in this film by an artist who documents life with her child with disabilities, and then start conversations about what it must be like to have this whole new world view quite unexpectedly.

“And then to have Frode’s work, with its connection to heavy metal music, which is very popular in Norway, is just great,” he said.

During the exhibit run, Norway House itself will celebrate the grand opening of its Innovation + Culture Center