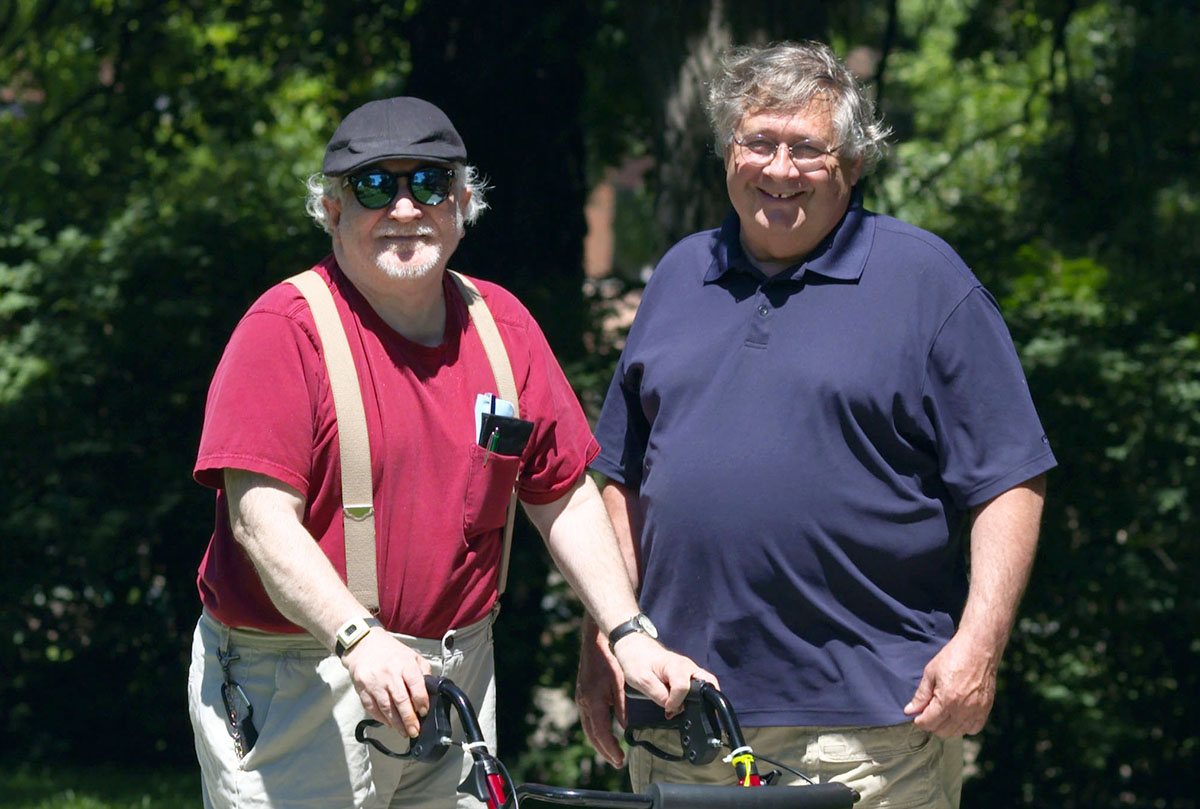 Cliff Poetz and Charlie Lakin standing together and smiling

The disability community lost an iconic champion on March 25, 2021 with the passing of Clifford (Cliff) Linus Poetz. I lost a cherished friend and colleague. I think Cliff’s friend John Smith summed Cliff’s life up well in observing that, “Cliff’s life was lived fully, daringly, effectively and happily.” Since 2001, Cliff worked as Community Liaison with the Research and Training Center on Community Living within the University of Minnesota’s Institute on Community Integration.

I remember meeting Cliff in 1979 when I visited a newly formed advocacy program called Advocating Change Together. I was quickly struck by how much Cliff knew of disability laws and policy, legislators and the legislative process, and the need for change. I also learned that Cliff’s work had begun well before I met him at Advocating Change Together. I learned that in 1971, then as a resident of a 120-person congregated care residence in Minneapolis, Cliff and two others formed a group called Telling It Like It Is. The group, with important support from chapters of what was then called the Association for Retarded Children, now simply The Arc, traveled all around Minnesota and into neighboring states sharing the experiences of persons with developmental disabilities living in congregate settings and the pain and discrimination deriving from being labeled as “retarded.” As Cliff often observed publicly, “When people are labeled retarded, people think they are stupid.” Cliff certainly was not stupid.

Sometime later I was talking with Cliff about how over-protective parents could be of their children, including adult children, with disabilities. He cited as a personal example that when he had gone to Washington, DC to testify on legislation, his mother had been terrified that he had on his own left his hotel and gone to a movie. “What?” I said, “You went to Washington to testify on legislation?” So the story goes that the efforts of Telling It Like It Is had been noted and highlighted in a front page article in the Minneapolis Star in 1972, with Cliff’s observations given substantial attention. Somehow that article got to the Senate Subcommittee on the Handicapped. And in 1973 Cliff was invited by the Committee’s Chair, Sen. Edward Kennedy, to testify at the Senate hearing on the “Developmental Disabilities Assistance Bill of Rights Act.” Cliff had two poignant memories from that experience. First, when a Subcommittee staff member called to offer the invitation, the director of the facility where Cliff lived hung up on him thinking it was a prank call. Only when Sen. Kennedy himself called, and backed his call up with a telegram, was it understood that Cliff was indeed being summoned. The other memory was that prior to the hearing, a leading advocate of a major disability organization questioned in front of Cliff whether it was a good idea for someone with a developmental disability to be testifying on such important legislation. I asked Cliff how that made him feel. He replied matter-of-factly that he knew she was wrong about that. Of course, today Congressional hearings on legislation affecting persons with developmental disabilities always include persons with disabilities.

From those early years Cliff remained an active and effective advocate and leader of Advocating Change Together, founded in the late 1970s, and was, with his long-term partner in advocacy, Irving Martin, co-founder and inaugural co-president of People First Minnesota in the mid-1980s. Cliff’s leadership roles have been numerous and varied. He served as a member of the Board of Directors of the Arc of the Greater Twin Cities, The Arc of Minnesota, and The Arc of the US. He was a member of the Minnesota State Council on Disability. He has served on the Board of Directors of the Interact Center for Visual and Performing Arts, Advocating Change Together, and the National Alliance for Direct Support Professionals. He has had advisory roles with a number of foundations and academic centers, ranging from the Headwaters Foundation for Justice to the University of Illinois at Chicago’s Institute on Disability and Human Development. In 2001 Cliff joined the staff of the Research and Training Center on Community Living as Community Liaison where he continued to work until his death.

Cliff has deservedly received many recognitions for his accomplishments, and they deserve citation, but when remembering Cliff, I think of strength of character and deep resolve to stand up for what is right. I feel I can never overemphasize the courage and commitment that Cliff showed over his years of advocacy and leadership. In 1970, when Cliff began his work, being identified as “retarded” was to be fully devalued. It must have taken incredible courage to stand up to such prejudice and discrimination to become one of the very earliest and most effective self-advocates for rights, dignity and opportunity for individuals with developmental disabilities. In the years that followed, Cliff never relented in his commitment to stand up to injustice and to make life better for people with disabilities, although he freely admitted it was a lot easier in 2020 than it was in 1970. Even as aging with cerebral palsy further restricted his ability to walk independently, Cliff somehow managed the energy and resolve get to meetings and events within and outside Minnesota, whenever and wherever there was opportunity to improve the acceptance, inclusion and well-being of persons with disabilities. I once accompanied Cliff to a fundraiser for the late Senator Paul Wellstone. Cliff had gotten to know Paul through a small group discussion on disability. When we entered this beautiful home in which neither of us felt at all at home, Paul spotted Cliff, excused himself from a conversation and rushed over to welcome him. Paul’s affection for Cliff had little to do with fundraising potential, but he saw in Cliff a kindred passionate spirit for justice.

Cliff was a groundbreaker and pathfinder in the inclusion and empowerment of persons with developmental disabilities for more than 50 years. As one of the very first active self-advocates not only in Minnesota, but in the Nation, the impact of his efforts has been widely recognized for their important contributions. In 1973 he was the first person ever with a developmental disability to be called to testify before a Senate Subcommittee on disability policy. He was one of very few people to have received the Joseph P. Kennedy Foundation Self-Empowerment Award. In 2010 he received The Arc of the Greater Twin Cities’ highest honor, the Founders Award. He received The Arc of Minnesota Public Policy Award at a dinner in his honor. He was the very first recipient of the Governor’s Award of the Minnesota State Council on Disability. Cliff was featured in the Minnesota Public Radio program on the 20th anniversary of the Americans with Disability Act. He is a recipient of the Charlie Smith Award, presented by Access Press for leadership within the disability community of Minnesota. In 2017 Cliff received the Leadership in Advocacy Award of the Association of University Centers on Disability. But for all the awards Cliff received I think Cliff most enjoyed his many years as co-chair of The Arc of Minnesota Awards Committee where he could play a role in recognizing others for their role in improving the lives of individuals with developmental disabilities.

It is never possible to say what would have happened in the absence of any one person. And it is especially hard to do so for the people who have been engaged in broad social movements. Would there have been self-advocacy in Minnesota and the United States without Cliff Poetz? Eventually. Would the U.S. Congress and the Minnesota Legislature have invited people with disabilities to testify on bills of importance to people with developmental disabilities without Cliff Poetz? Eventually. Would the Research and Training Center on Community Living have hired someone with a developmental disability as a liaison to the disability community without Cliff Poetz? Eventually. Many such questions could be asked about Cliff’s engagements and for most we can assume that the changes he worked hard for would have come eventually. But undeniably Cliff was always a front-edge dreamer of and catalyst for the changes that have come. I feel honored to have been a friend of Cliff and will find blessing in my memory of his accomplishments and of our times together.