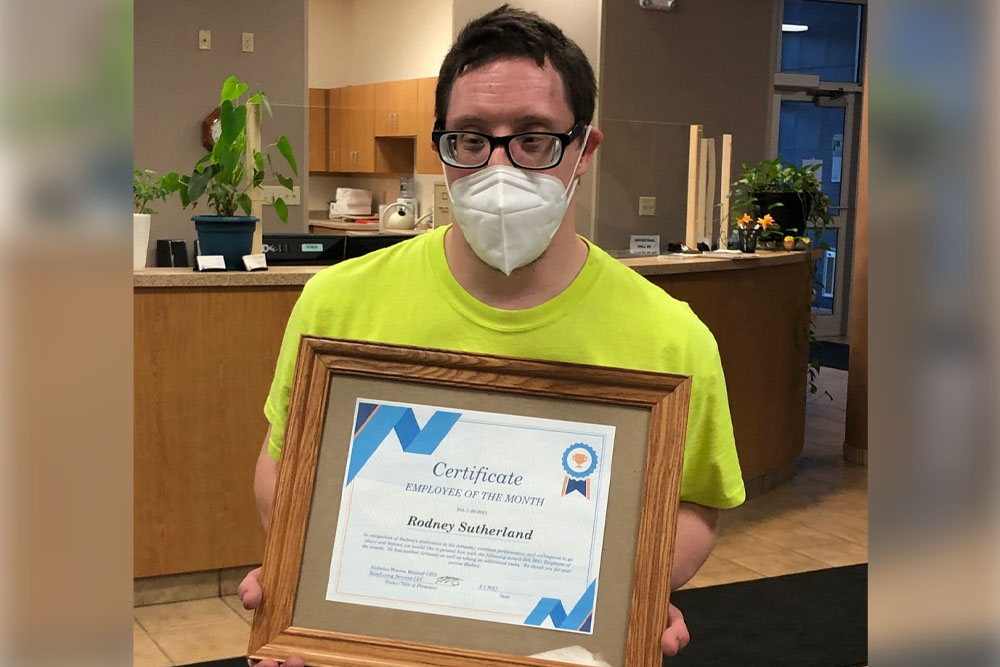 Five evenings each week, Rodney Sutherland takes a taxi to his job cleaning administrative offices and breakrooms for drivers at the Duluth Transit Authority. He likes chatting with the drivers and office workers, and he really likes going out to eat with friends with the money he earns.

“My favorite taxi driver is Erica,” said Sutherland, who was born with Down syndrome and has some visual impairments. “I like being independent, and getting to work on my own.”

As employers struggle to fill vacant jobs and increasingly consider diversity and inclusion in their hiring practices, the theme for this year’s National Disability Employment Awareness Month is “America’s Recovery: Powered by Inclusion.

” The observance honors the contributions of people with disabilities in the American workplace.

When Sutherland was a young child, his father worked at the DTA and often brought Sutherland to the transit center to enjoy the bustling atmosphere. Once he became an employee, he had to learn not only about janitorial work, but also about how to get along socially in the office. Even hiring a taxi—and alerting drivers when they take him to the wrong facility—are accomplishments that some of his family members never dreamed he’d achieve. After starting at just a few hours a week, Sutherland now works 20 hours and was named Employee of the Month earlier this year.

“Rodney’s professionalism has gone through the roof since he started this job in February,” said Casey Lozon, career and life coach manager at Udac, Inc., a disability service organization that is working to place people with disabilities in jobs in their communities.

For more than a decade after high school, Sutherland worked in the mailing and shredding room at Udac under Labor Department rules allowing contract work performed by people with disabilities to pay below the minimum wage. The goal was to provide jobs and training in a safe environment for people with disabilities, who could then use the experience as a stepping stone to paid employment in the community. In recent years, however, disability advocates have been calling for an end to subminimum wages, arguing that the work was not leading to good jobs.

But switching to competitive employment involves highly individualized training and lots of staff time. In Sutherland’s case, that meant learning proper cleaning procedures and how to take a taxi by himself, as well as soft skills, such as knocking first before entering offices and respecting when co-workers need to focus and can’t socialize. Once that investment is made, however, it keeps paying off.

“We started treating Rodney as a professional. Instead of him telling his career coach the things that he needed, we worked on having him communicate directly with the employer about supplies that he needs or vacation requests,” said Ann Dahl, Udac’s operations director. “Doing that eventually changed his view of what this job is all about, and he realized he needed to up his game. We gave him training and task lists, but then we backed off and let him do the job.”

Like many other service providers across the country, Udac had begun transitioning away from group contract work. After the pandemic forced an abrupt closure of its facility in early 2020, the transition became a hard stop, said Karen Herman, executive director at Udac.

“After conversations with the board of directors and with legislators, we concluded that 14c [the regulatory code allowing subminimum wages for people with disabilities] was not our future,” said Herman. “We closed programs and we started to rebuild. We are committed to the creation of community-based services and an organization that is a model for the future.”

As part of that rebuilding, Herman connected with ICI Director Amy Hewitt and Danielle Mahoehney, an ICI education program specialist with expertise in workforce development. Along with Don Lavin, a consultant in competitive integrated employment, the team provided support, planning, and guidance as Udac rebuilt its staff, gearing services to focus on finding and advancing careers, not just jobs, for people with disabilities.

“I don’t think we could have done this as well or with as much confidence without the support ICI provides,” Herman said. “Of course, no organization can make this kind of rapid change successfully without buy-in from the employees making it happen every day, so we brought back key members of our former team and invited them to help us fundamentally transform how we approach working with clients. The team’s excitement and dedication to this process is a testament to their belief in the work we are doing.”

Udac also transformed its senior program, emphasizing activities out in the community that go beyond tourist outings.

“Our senior program was very well respected and did great work, but when we asked ourselves, ‘If we were aging in the community and didn’t have Udac, what would we be doing?’ we realized we needed to be engaging more with other seniors and community programs, and so we’ve begun interacting with senior centers much more.”

For its competitive employment placements, Udac now has a roster of employers who are embracing workers with disabilities as part of their organizations. Among them: Aramark, Culver’s, EasyLiving Services, General Cleaning Corp., Grandma’s Restaurant, Loll Designs, Roufs Property Maintenance, Sammy’s Pizza and Deli Lakeside, Superior Nets, and Super One Foods Lakeside.

“Udac’s organizational transformation has expanded its competitive, integrated employment services and they’ve had some great success stories in the past few months,” said Mahoehney. “Change can be very difficult, but the staff is dedicated to making meaningful work happen for people with disabilities.”