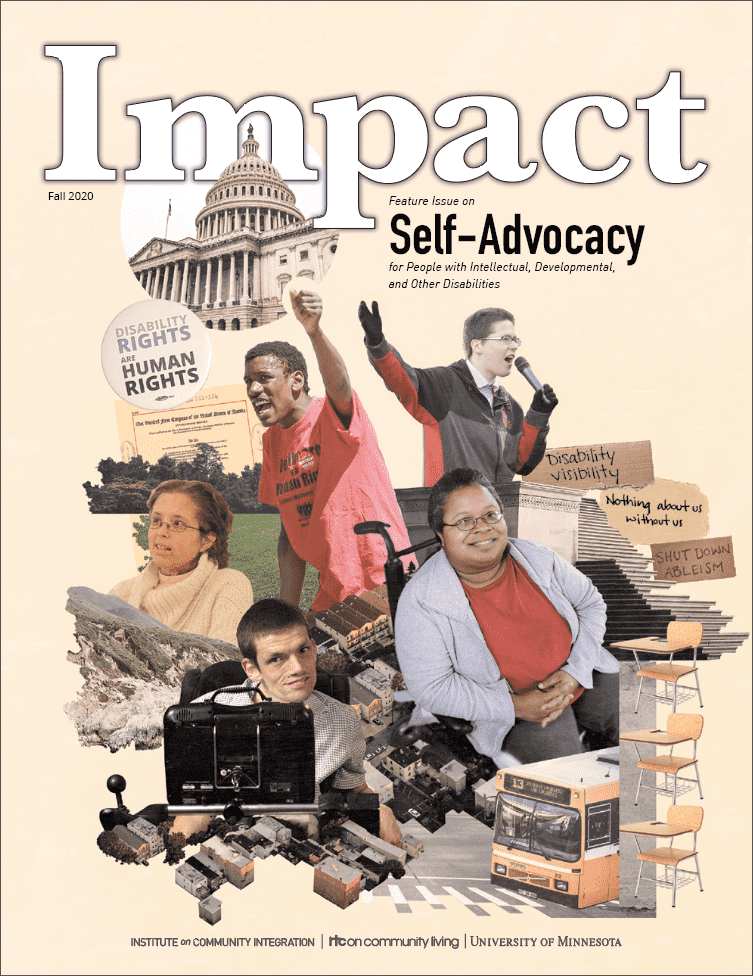 The year 2020 has been a lightning rod for people with disabilities who advocate for themselves and others to design and live their own lives.

Early in the COVID-19 pandemic, many protested healthcare rationing decisions that threatened to put them at the back of the line. Others spoke out when they lost critical services from direct support professionals or feared for their lives in congregate care settings. When George Floyd’s killing in Minneapolis sparked global calls for fundamentally reexamining systemic racism, people who live with disabilities renewed the conversation about the intersectionality of racism and ableism.

Against that backdrop, the latest issue of Impact examines the Self-Advocacy Movement, its history, and the role it plays today. Articles explore the current issues self-advocates are fighting for, the debate over the term ‘self-advocacy’ itself, ways to get started as a self-advocate, and the personal stories and programs shaping the Movement today.

“We are at a critical time for the country and for the Movement,” said Teresa Moore, a guest editor for this issue of Impact. She is director of the Self-Advocacy Resource and Technical Assistance Center, a project of Self Advocates Becoming Empowered (SABE). “People want to know SABE's position on using the term self-advocate or advocate in the work they are doing, among other topics. This issue of Impact is going to set the pace for quite a long time and will help self-advocates and their groups work on what is important to them.”

Moore and three other self-advocates served as guest editors for the publication, which is produced by the Institute on Community Integration and the Research and Training Center on Community Living and Employment under grants from the U.S. Department of Health and Human Services and the National Institute on Disability, Independent Living, and Rehabilitation Research.

“This issue is important because our Movement, for and by people with intellectual and developmental disabilities, is alive and well, but it needs more attention. We are not getting the recognition that we deserve in the broader disability world,” said Max Barrows, an Impact guest editor and outreach director for Green Mountain Self-Advocates in Montpelier, Vermont. Barrows hosted several online discussions with dozens of self-advocates for an article highlighting today’s most pressing issues. “If you are new to our Movement, this issue is a great way to begin your relationship with self-advocacy.”

Mike Rogers, regional organizer for the Self-Advocacy Association of New York State, served as an editor and contributed to several articles, including an interview with Samuel R. Mattle, founder of the Center for Self Advocacy in Buffalo, New York.

“Creating this publication on self-advocacy is very important to me,” Rogers said. “We need to expose people without disabilities to the power of the Self-Advocacy Movement and our ability to impact the world.”