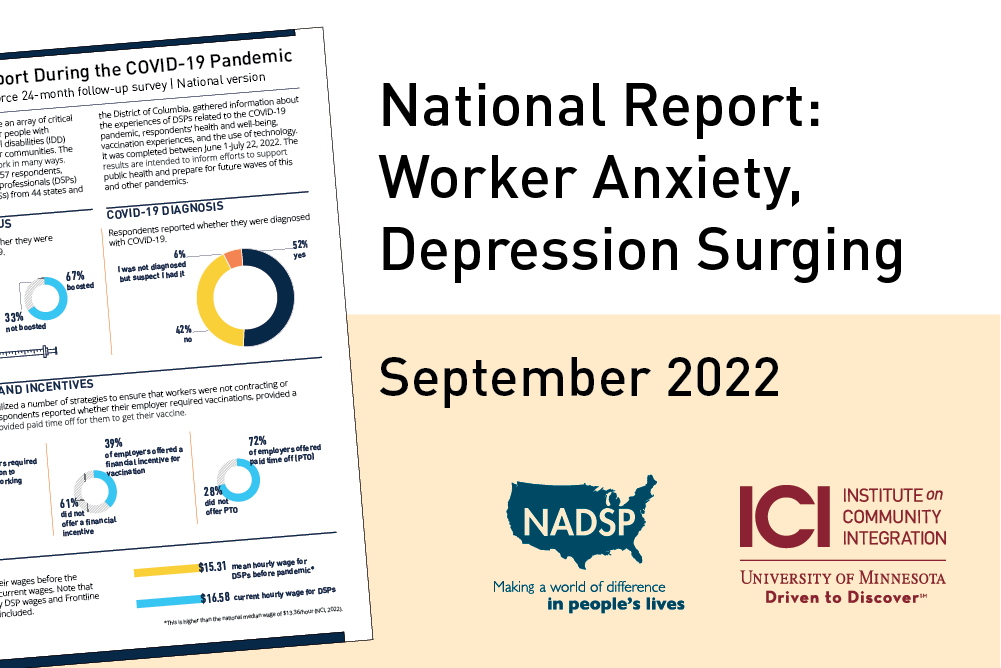 While vaccination rates have improved among professionals supporting people with intellectual and developmental disabilities since the early days of the COVID-19 pandemic, their mental and physical health have declined, a new survey shows.

The Institute on Community Integration, in partnership with the National Alliance for Direct Support Professionals (NADSP), surveyed 2,657 DSPs and frontline supervisors about their experiences supporting people with IDD during the pandemic. The newly released survey report is a 24-month follow-up to an initial report issued in April 2020. Additional surveys were conducted six and twelve months after the initial report. The survey series represents the largest-ever national study of the DSP workforce.

According to the report, 52% percent of DSPs reported being diagnosed with COVID-19, and 6% were not diagnosed but suspected they had it. Among employers, 65% did not require DSPs to be vaccinated.

Sixteen percent of DSPs remain unvaccinated. Of the 84% who are vaccinated, 67% reported having at least one booster shot.

While vaccination rates have improved from the 12-month survey in 2021 (from 72% to 86%), the mental and physical health of DSPs has declined. Forty percent of DSPs reported experiencing depression, compared with 36% one year ago; 43% had difficulty sleeping, a 5% increase; 56% reported increased anxiety, a 9% increase; and 21% reported physical health complications, a 3% increase. Fifty-nine percent of respondents said they felt pressure to work extra hours.

“Direct support professionals and frontline supervisors have worked as hard as they can,” said Amy Hewitt, ICI director and lead investigator of the study. “This survey shows that their mental health is worsening, and we don’t have the resources to address it. Working this much overtime is not sustainable.”

A national plan to increase the size of the direct support workforce would help to alleviate multiple troubling issues, Hewitt said.

“This workforce has been overlooked and in crisis for years, with high turnover and vacancy rates, low wages, and lack of access to affordable benefits,” she said.

More than half of DSPs receive government-funded assistance, such as housing, energy, food, and healthcare. The pandemic made staffing even more difficult, increasing stress, expectations, and risk on those who remain in their positions.

Read the full report, a short version, and select state-specific versions at z.umn.edu/dsp-covid19.

About the RTC-CL and NADSP

The Research and Training Center on Community Living for Persons with intellectual and Developmental Disabilities (RTC-CL) has operated at the University of Minnesota since 1976. During this time, it has made many substantial contributions that have positively affected the field and the lives of people with disabilities by developing effective, research-based interventions and creating new knowledge that has influenced practices and policies for increasing community living and participation for people with disabilities. The RTC-CL is housed within the Institute on Community Integration,

a department within the University of Minnesota’s College of the Education and Human Development, and funded by the National Institute on Disability, Independent Living, and Rehabilitation Research (NIDILRR), U.S. Department of Health and Human Services.

In 1996, the National Alliance for Direct Support Professional’s ideological founder, John F. Kennedy Jr., wrote “Quality is defined at the point of interaction between the staff member and the individual with a disability.” Given this, NADSP’s mission is to enhance the quality of support provided to people with disabilities through the provision of products, services, and certifications which elevate the status of direct support workers, improve practice standards, promote systems reform and, most importantly, advance the knowledge, skills, and values of direct support workers. For more information, please visit www.nadsp.org.