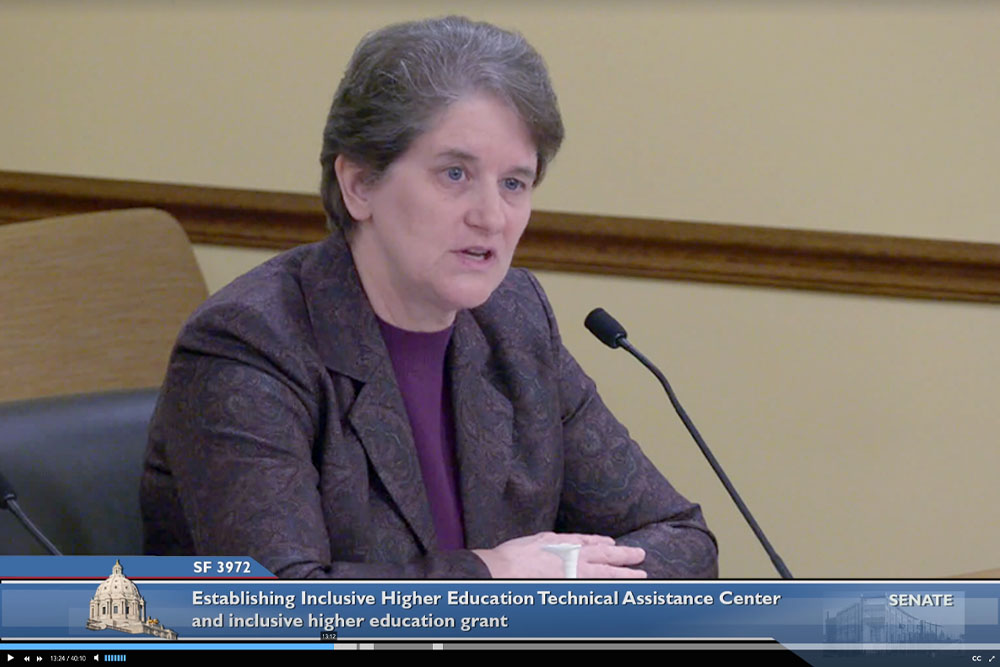 award from the Minnesota Council on Disability, recognizing her contributions to building momentum for inclusive higher education in the state.

Hauff is part of a parent-led collaborative group called the Minnesota Inclusive Higher Education Consortium (MIHEC). The Institute is the host organization for MIHEC, which includes state and local education agencies, students, advocates, legislators, and others interested in expanding postsecondary opportunities for students with intellectual disability (ID).

Hauff wrote the legislation for the Inclusive Higher Education Act, which earlier this year advanced through the Minnesota House of Representatives and was included in the Higher Education Conference Committee report. It would have established a technical assistance center with public information about higher education options for people with ID, provided expertise and support for faculty, and established grants for other initiatives at public institutions of higher education in the state.

The full Senate did not vote on the measure by the deadline for the regular legislative session, but the bill would not have advanced so far without Hauff’s dedication and passion, said Julia Burkstaller of The Arc Minnesota, who nominated Hauff for the award.

“We would reach a brick wall, and she would still be trying to find a way around it,” Burkstaller said of Hauff’s efforts in building awareness about the legislation. “We met multiple barriers, but she kept asking questions until we found a path forward and, ultimately, the bill made it into the final committee report. That was a stamp of approval from our bipartisan legislative leaders in higher education, which puts us in a strong position for the next session.”

Meanwhile, Hauff and the MIHEC team are moving forward with a series of learning community events. The next event, on Sept. 20, will feature Burkstaller and Dupree Edwards, a teaching artist and member of the Minnesota Governor’s Council on Developmental Disabilities. They will share their advocacy experiences and offer insights for getting students, parents, educators, and faculty involved in inclusive higher education advocacy. In October, Hauff will be part of a panel discussing state policy and partnership strategies at the State of the Art Conference on Inclusive Postsecondary Education and Individuals with Intellectual Disability at Syracuse University. A Nov. 15 learning community event is also being planned.

“We believe the bill would have passed if it was brought to a Senate vote,” Hauff said. “It was a huge effort to just get it in the conference committee report, but the work is not done. We are focusing on this positive momentum and the added awareness it brings to our efforts and look forward to our upcoming fall events to keep inclusive higher education a priority in our state.”