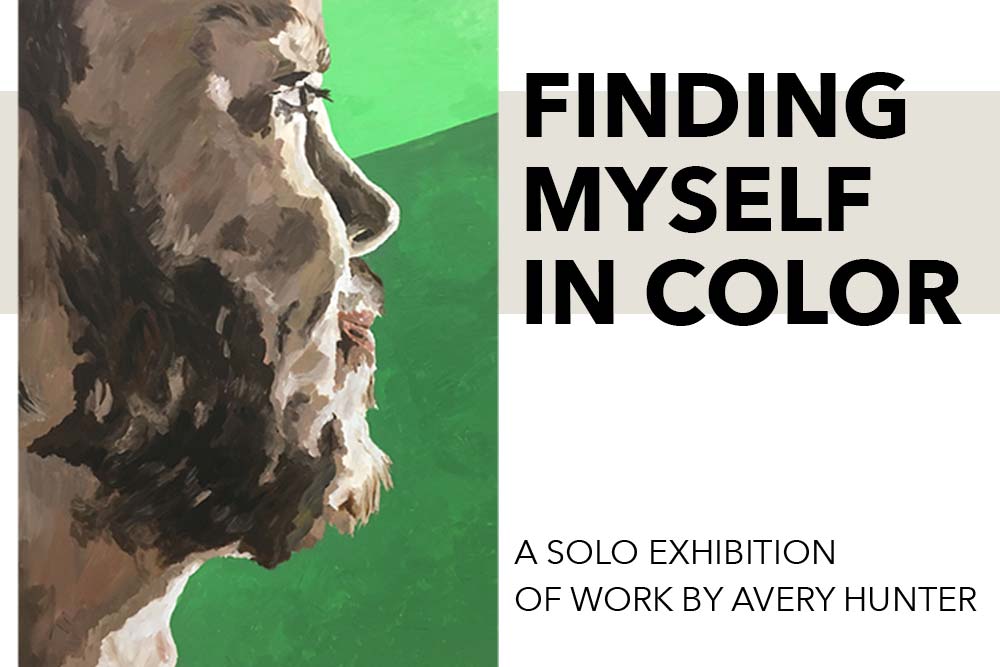 Asked whether his visual art is influenced by well-known painters, Avery Hunter

“Absolutely,” Hunter said recently while preparing for his first solo exhibit, Finding Myself in Color, running July 7 – September 9 at the Brenden-Mann Community Center, Masonic Institute for the Developing Brain, 2025 E. River Parkway.  Hunter will discuss his art and advocacy at 4 p.m. on July 7, with a reception to follow from 5 p.m. to 7 p.m. that is free and open to the community. The exhibition is part of Art for All, the Stephanie Evelo Program for Art Inclusion at the Institute on Community Integration.

It isn’t necessarily Vincent van Gogh’s artistic style that captured Hunter’s admiration, but that he created timeless works of art while living with mental illness.  “In those dark times, to be able to produce Starry Night. To have the ability to see all that depth of color and the layers involved in it,” Hunter said. “Also, Jackson Pollock, for the use of color and the freedom of expression to just put the paint on the canvas. It’s really interesting how he looked at the world. I think he said something about painting as self-discovery. I feel the more I paint, the more I discover about myself.”

That Hunter is drawn to such seemingly different artists – Van Gogh with his deliberate brushstrokes and Pollock with his abstract “drip” technique – is all the more intriguing when one considers the work of Lior Shamir.

Writing in the journal Leonardo a decade ago, Shamir, a computer scientist interested in artificial intelligence, shared results of a digital analysis of works of art by nine famous painters, including Van Gogh, Pollock, Kandinsky, Dali, and Monet. Examining minute details of the paintings rather than the composition, the analysis found that Pollock’s work shared far more artistic similarities with Van Gogh than with the others.

In some ways, Hunter’s work echoes both artists. The exhibit will feature abstract works as well as self-portraits. During the July 7 artist talk, Hunter will discuss his work and his life as a transgender man living with autism, attention deficit/hyperactivity disorder, schizoaffective disorder, and rheumatoid arthritis.

“I have been driven to accomplish distinct aesthetics in my work through the levels of psychosis that I experience,” he said. “The amount of color in my work speaks to the freedom I feel in expressing my voice creatively, and the subject matter I present in quite a few art pieces advocates for those who need to be represented without stigmas, such as the LGBTQ+ community and people with disabilities. Yet, there is more to one’s identity than their belonging in these communities. Therefore, I continue to explore what it means to be human in my work.”

Identity advocacy was a critical goal in selecting artists for the 2022 exhibition season, said Nik Fernholz, program manager for Art for All.

“The more I thought about disability pride, the more I realized much of society still views the word itself as a negative, but we have an opportunity to see disability as a strength,” Fernholz said. “It was important to curate artists who incorporate their identities into their work. Avery’s identities fit well with Art for All’s year of celebrating disability pride. In art, beauty is often seen through color or characters, but there is beauty in the message, too.”

Hunter, who grew up in England and came to Minnesota as a young adult, said he hopes audiences will see the nuance in his journey as an artist. Undiagnosed as a child, his artwork has transformed into more colorful pieces today, mirroring his journey to a healthier place, he said. But unlike Shamir’s digital analysis, this switch isn’t binary. There are complex layers of color in his work, and in his disabilities and identities today.

“People have said to me they don’t think I look autistic, or that I don’t seem like someone who has hallucinations. I want people to see that there are struggles beyond what people can see, and to know there are so many aspects to identity beyond disability.”