It’s Up to You: Reaching Out to DSPs 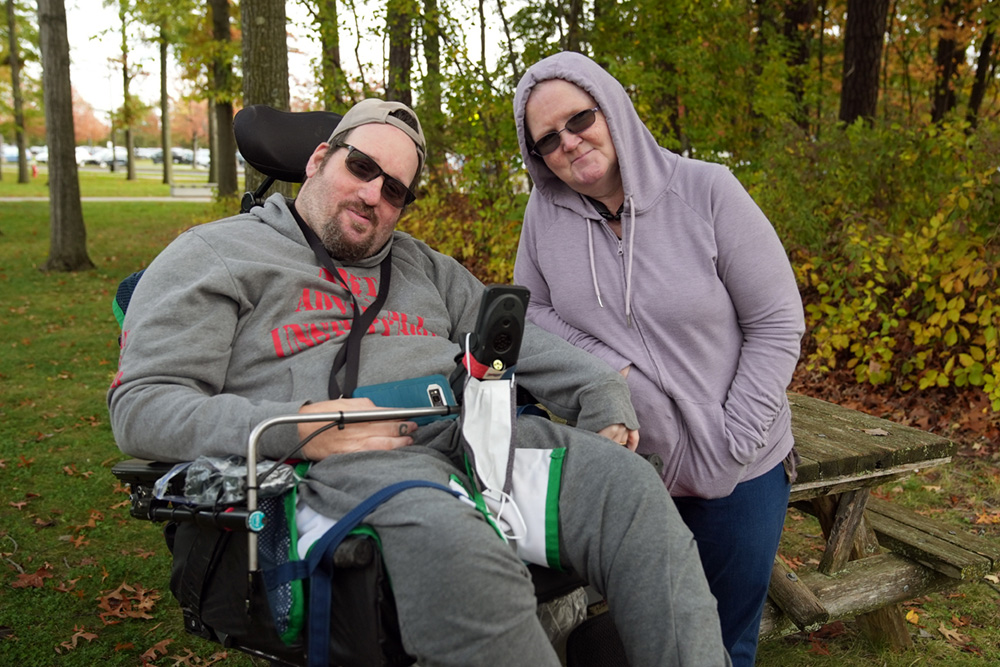 A man sleeps in his wheelchair because of staff shortages. A professional providing support to people with disabilities loses her husband to COVID-19. While working with a person with a compromised immune system, a young father considers the risks of spreading the disease from home to work.

In a series of true-life stories, direct support professionals (DSPs) are sharing their decisions about vaccinating themselves against COVID-19. The Institute on Community Integration is producing the series, which already includes five public service announcements filmed in Minnesota this summer. ICI is also partnering with the National Alliance for Direct Support Professionals to produce additional PSAs in New York. The work is part of a cooperative agreement with the Association of University Centers on Disabilities (AUCD), funded by the Centers for Disease Control and Prevention, to promote vaccine confidence.

“Our goal is to build connections, share information, and provide authentic stories of DSPs about the importance of their work and why they chose to get vaccinated,” said Jennifer Hall-Lande, who, along with Lynda Lahti Anderson, co-leads ICI’s COVID-19 vaccine access and confidence project.

The announcements urge DSPs, who support people with intellectual and developmental disabilities (IDD), to consider their own and others’ health as they decide whether to vaccinate themselves. Some evoke the Ad Council tagline “It’s up to you,” acknowledging that the power to protect people from the worst of the disease often resides with DSPs themselves. While many healthcare facilities mandate vaccines, DSPs, who work in a variety of settings, often do not face vaccine mandates. Research studies have shown people with IDD are at substantially higher risk than the general population of getting COVID-19 and of dying from it. In a July survey performed by ICI, more than a quarter of DSPs were not vaccinated, a higher rate than the general population.

“I’ll just be careful, wash my hands, and wear a mask,” Natalie, a DSP, says in one of the announcements about her first thoughts about the vaccine, citing concerns about potential side effects. “But then I thought, you know what, I’m taking care of some very important people.”

Mixed messages about COVID-19 in various media also stopped Sara from getting a vaccine initially, she shares in another video. After doing her own research, she decided to get the vaccine, and convinced a few colleagues to join her.

“We know that many of the unvaccinated are not responding to public health experts, or facts, about COVID-19, and unfortunately the issue has become politicized,” said Jerry Smith, ICI’s director of marketing and communications. “Our approach is to capture DSPs speaking peer to peer about their deep commitment to the people they support and why vaccinations matter to them.”

Smith is directing the videos, and ICI’s Pete McCauley is filming and editing the work. More announcements, from Minnesota and other parts of the country, will be added in the next few months. Social media, email blasts, and websites of agencies supporting people with disabilities are the primary dissemination channels for the PSAs, which run from 30 to 90 seconds. The initial five announcements have had more than 10,000 page views.

ICI Director Amy Hewitt, a former DSP, praised direct support workers for their service to people with disabilities during the pandemic, despite being substantially overworked and underpaid for the responsibilities they assume.

“DSPs continued to show up to support people with disabilities despite a deadly pandemic,” Hewitt said. “Our message to them is that we recognize both their professionalism and their concerns about vaccinations. We hope to showcase independent thinkers who considered all the facts and, ultimately, chose to protect themselves and those they support. We are incredibly grateful for all of the sacrifices they make so that people with disabilities can live better lives.”

study shows that more than 3,600 healthcare workers have died in the first year of the pandemic, and frontline workers were much more likely to die than other clinicians.

“This is a major concern,” said Joseph Macbeth, president of NADSP. “Since the onset of the pandemic, NADSP has tried to make sure that DSPs have access to the most timely, reliable, and fact-based information available. When the opportunity arose to create these public service announcements, we knew ICI would be the perfect partner because of its decades of direct support workforce and documentary work. Our organizations share a deep commitment to direct support professionals, and I believe this work will provide vitally important information in a respectful and dignified way.”