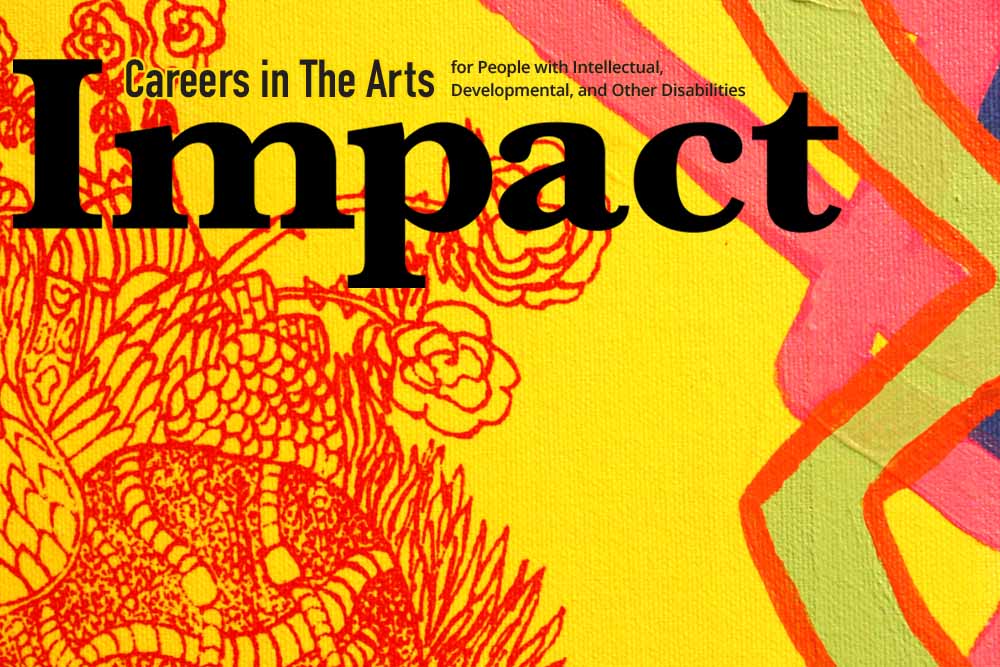 The work of nearly three dozen professional artists with disabilities is highlighted in the new issue of Impact, a print and digital publication of the Institute on Community Integration.

Articles by Leroy Moore, founder of Krip-Hop Nation, and William Britt, a visual artist who spent more than 30 years institutionalized at Willowbrook State School, accompany scholarly articles assessing the progress toward inclusion in the professional arts for people with intellectual, developmental, and other disabilities. Visual and performing artists at all stages of their careers and leading programs working to helping artists develop their professional careers also are featured.

“This issue showcases the complex nature of artistic careers and the seriousness of artists who have traditionally been cast aside,” said Nik Fernholz, program manager for ICI’s Art for All, who served as an issue editor. “It bridges a gap between these artists and the greater arts community, defining an inclusive space for artists at all stages of their careers.”

A talent studio founder in Los Angeles takes readers behind the scenes as he coaches actors with disabilities in their television and film work, including roles in The Good Doctor, Born This Way, and Glee.

And Jeanne Calvit shares the story of how she started Saint Paul’s Interact Center for the Visual and Performing Arts.

“We know that the artistic process has the power to change things, to give us those ‘ah-ha’ moments that can blow your thinking wide open,” she writes.

“The creative talent of artists with disabilities warrants greater visibility and recognition,” Raynor said. “There are no limits to this talent, and this issue shows the progress that is being made in representation and recognition for artistic excellence. It also points out the need for more education and training opportunities for people with disabilities to develop and succeed in professional careers in the arts.”

Other artists and programs featured in the issue include Jimmy Reagan, the Saint Paul painter whose work has been exhibited throughout the United States and in Europe; Jeremy Sicile-Kira, a San Diego-based painter with autism who experiences synesthesia, allowing him to perceive people and their emotions as color; and Mind the Gap, England’s largest theater company working with performers with autism or learning disabilities.

Siegel said advising the feature issue reminded her that access to the arts connects us with one another, and makes us fully human.

“Art allows us to communicate our feelings and fears, our desires and dreams,” she said. “In this odd year of social reckoning and pandemic, climate change, and political change, working on this issue of Impact gave me a sense of purpose and it reminded me of the words of President John F. Kennedy, engraved on the walls of the Kennedy Center:

‘I am certain that after the dust of centuries has passed over our cities, we, too, will be remembered not for victories or defeats in battle or in politics, but for our contribution to the human spirit.‘”