Disability Rights: Storytelling in the Congo 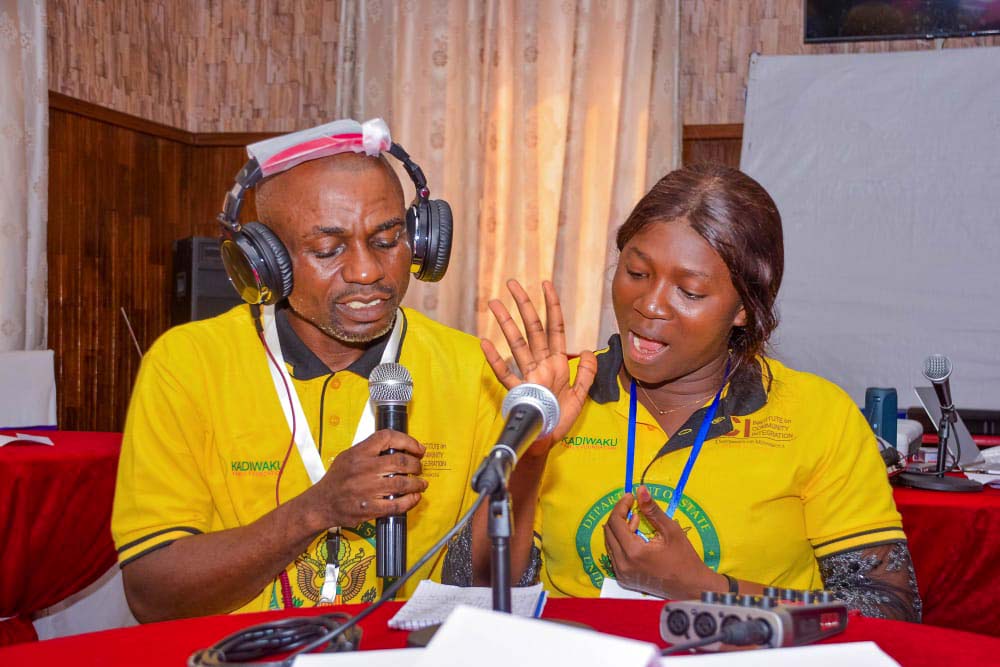 Under a U.S. State Department grant aimed at combating persistent human rights abuses in the Democratic Republic of the Congo, the Institute on Community Integration last month trained people with disabilities and non-profit organizations in the central African nation on advocacy strategies, including the use of radio and social media to raise awareness about disability rights.

Working with the Kadiwaku Family Foundation,

ICI’s Macdonald Metzger and Lynda Lahti Anderson offered training in social and broadcast media storytelling for about 100 individuals with disabilities, and in strategies for cooperatively advocating for the rights of people with disabilities for representatives of more than 60 community, governmental, and human rights organizations. The trainings were held in Kisangani, a city of about 1.2 million people.

“With very few resources, there is actually quite a lot of disability advocacy work going on there,” Anderson said. “Our message was focused on how to support a community of practice and have organizations work together to build a sustainable structure.”

The DRC ratified the United Nations’ Convention on the Rights of Persons with Disabilities and its laws offer education and employment protections, but substantial discrimination and stigma remain.

“We focused on skills that people with disabilities can use to write scripts, research content, conduct interviews, and essentially, tell their stories at the grassroots level, using radio and social media, to build awareness of disability rights,” Metzger said. “In the future, we’d also like to meet with editors and other media outlet managers to talk about the need for more disability coverage.”

As part of the two-year State Department project, the group earlier surveyed 1,000 people in the region about attitudes and behaviors toward people with disabilities. They expect to repeat the survey later this summer to determine if the trainings helped increase awareness of disability rights. In the initial survey, nearly 83 percent of respondents said they feel uncomfortable when they see a person in a wheelchair.  Nearly 50 percent said they have the impression that people with disabilities are being punished for something they have done.

“We were also fortunate to have Iréne Esambo, the DRC minister of human and disability rights, attend some of the events. She’s the first person to hold this office, and she has some ambitious plans to improve things in the region,” Metzger said.

Anderson noted there is power, too, in smaller steps.

“The woman who runs the hotel where we stayed came to the training and said she had never thought about accessibility features because she believed people with disabilities wouldn’t be able to afford to stay in a hotel. After the sessions, she said she would be incorporating accessible features into an expansion she’s planning. And an English professor we hired as a translator said he would be volunteering to help increase the enrollment of students with disabilities in schools. It just takes a couple of people to start a ripple.”