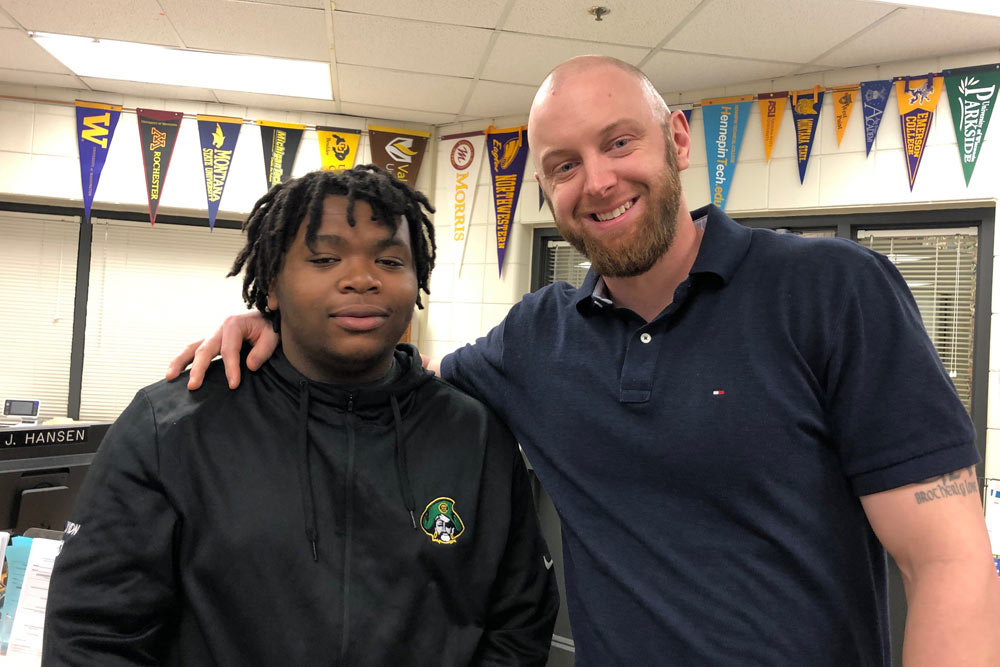 When schools nationwide closed last spring, Elizabeth Xiong knew immediately that the closure would hit some students much harder than others.

“Our mentors started doing more social-emotional health check-ins, rather than focusing on academics,” Xiong said. “We knew right away that our students in special education classes had already been dealing with so many challenges, and we were going to have to first see how they were doing and if they were taking care of themselves. We had some mentors checking in at 11 p.m. because that’s what worked for their students, who were now on an altered time schedule.”

One student, so unnerved by the online meeting process that he covered his face while meeting with his mentor, eventually grew comfortable enough to uncover his face and speak freely.

For 30 years, Check & Connect has paired mentors with students who have a history of truancy, poor grades, or behavior issues, with the aim of improving student performance and lowering dropout rates.

At first, families and students in the program—like many of those outside the program—had trouble even grasping the notion that schools would be closed for weeks, then months. As the new reality set in, however, connections with mentors actually deepened, Xiong said.

“Families of our students really appreciated the check-ins. We had two students who lost family members to Covid, and two more who had family members die unexpectedly due to other reasons, so it was a difficult time,” she said.

“That was a real challenge for mentors, to have those difficult conversations,” she said.

Developed in 1990 by the University of Minnesota’s Institute on Community Integration as an intervention for K-12 students at risk of disengaging at school or dropping out, Check & Connect is the only program found to show strong evidence of keeping students in school.

The “Check” part of the program involves continuous monitoring of class attendance, behavior, and academic performance. The “Connect” part involves a mentor who oversees the monitoring and develops relationships with students and their families to improve the numbers in all three areas.

The program has now been implemented in 48 states and seven foreign countries. A web-based application was added in 2017, and adaptations for students from refugee families in the United States and indigenous tribes in New Zealand have been added in recent years.

The Osseo district started implementing the program as a small pilot three years ago, designed particularly to assist Black and Native American at-risk students, grades 6 to 12, who have IEPs at school. Of the two graduation classes in the pilot to reach their senior years so far (27 students), 19 students graduated on time and six stayed on in school. The graduation status of one student in the first cohort is unknown and another is enrolled in a general educational development program. Last year, none dropped out or went to a GED format.

Preliminary results from an impact study of the program found that Check & Connect students reduced their dropout risk more than a control group, Xiong said.

Kayvon Williams is among those success stories.

Despite losing multiple family members and friends to gun violence—and being shot himself as a teenager – Williams graduated in 2019 from Park Center Senior High School.

Playing football, keeping a close relationship with his mother, and daily conversations with his Check & Connect mentor, Darren Nelson, made that happen, Williams says. The two men are pictured together above.

“He [Nelson] told me, ‘Life is full of distractions, but it goes on and you have to get back on track,’” said Williams.

The 6-foot, 260-pound defensive lineman bonded over sports with Nelson, a fellow athlete who earned a teaching license in health and physical education before embarking on a master’s degree in special education.

“He’d ask me about what I was doing to stay in shape, what protein shakes I was taking or whatever, and I’d just say, ‘Look, I got up at 4:30 this morning to work out. You’ve just got to put the time in,’’’ said Nelson.

“[Kayvon] came from challenges you and I have never experienced,” Xiong said. “Because of his relationship with Darren, he didn’t really have any behavior issues, and Darren also helped him get through the requirements for graduation.”

“It gave me a more detailed way to present what his attendance really was. Presenting the information like that gives them no escape. You can’t sweet-talk the information I just pulled up on the screen. It’s like, ‘Dude, you can think you have a C-minus in this class but you don’t. You can say you have your grades under control, but these forms show they’re not. It’s all right here,’” he said. Even now, more than a year after graduation, Nelson checks in with his mentee.

After taking some college classes and playing football last year, Williams this summer was weighing options at various schools, talking with Nelson about the opportunities. When school and football are done, Williams says, he wants to be a dental hygienist.

“My hope for Kayvon and the other students in the program was, and is, that they graduate from high school, are knowledgeable about post-secondary options and hopefully, have a good job,” said Nelson. “If you show up on time and do things right, you can get a good, livable wage.”

Many students enrolled in Check & Connect, like Kayvon, face myriad challenges that impede their ability to focus on academics, including poverty, racial discrimination, violence, and a lack of real access to what few resources are available, Nelson said.

“I’m a huge advocate of Check & Connect and will be a mentor again, but I get frustrated thinking about the lack of money and support for real change. What can we do besides just having me talk to these kids?”

For her part, Xiong sees the kind of work Nelson is doing as more far-reaching than even he can see right now.

Growing up in public housing in North Minneapolis after her parents immigrated from Laos, Xiong understands the hopelessness that many students embarking on their adult lives feel.

“I had amazing teachers and supporters who, without their help, I wouldn’t be here today,” she said, referring to her professional growth. “We need to celebrate these students’ successes. Kayvon, for example, is alive and he graduated high school, and that’s a huge achievement that needs to be celebrated. He grew enough while he was in the program to really see himself past high school. Getting these students to see beyond where they are now is the mind-shift we’re looking for.”

As school began this fall, there were the expected challenges about safety and communication as some students came back to the building while others remained in virtual classrooms, and even more students and families reached out for support. They welcomed the extra supplies the district provided, including lap desks and organizational tools, Xiong said.

“We want our students to be successful this year, and we know the relationship between students, families, and mentors can make it happen.”